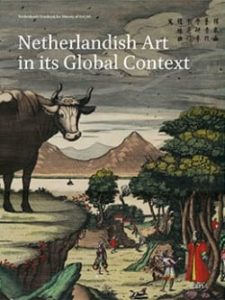 Netherlands Yearbook for History of Art 66

The art of the early modern Netherlands was a global art in various dimensions. Paintings and prints were made for worldwide export; artists depicted foreign rarities; applied arts from Asia were imported on an industrial scale. Famous masters stood out for their interest in distant traditions, from Vermeer’s Chinese porcelain to Rembrandt’s Mughal miniatures and Rubens’s engagement with the worldwide Jesuit mission. Histories of Global Netherlandish Art, 1550-1750 identifies and addresses some of the challenges and opportunities that global art history offers for the Low Countries.

This project explores to what extent artworks were more than illustrations of the interconnectedness of the Early Modern world, with Antwerp and Amsterdam as hubs of global exchange. Everyday lives changed as foreign luxuries, and their local imitations, became a household presence. Images of real and imagined foreigners circulated on an unprecedented scale. Travelers and scholars pondered unknown iconographies, which sometimes threatened to unsettle Eurocentric perspectives.

The project’s key question is: how did new artistic media, materials, and meanings emerge in the wake of European expansion? It addresses the interplay between artistic, scholarly, and commercial institutions (guilds, academies, collections, trading companies) in order to shed new light on transfers of cultural knowledge and innovation in the early modern world.

The researchers currently involved in this project are:

Surekha Davies (Postdoc), Collecting Artifacts in the Age of Empire: Spaces of Disruption, 1550-1725

The project organizes the ongoing Seminar in Global Art History and Heritage, jointly with Mary Bouquet (University College Utrecht) and Stijn Bussels (Leiden University). In November 2018 it hosted an international conference, Netherlandish Art and the World. In August 2021 it organizes the conference The Cultural Dimension of Dutch Overseas Expansion.

The project follows up on the earlier results of  The Chinese Impact: Images and Ideas of China in the Dutch Golden Age.